Regular readers of this blog know that two of my fascinations, outside of film, are Zen and Quantum Physics. Both suggest that bookmarks such as dates are merely concepts, and not reality.

Even as we are (sometimes) Sentient Beings, we like those bookmarks to make things feel more orderly, when, in fact, all that is real exists is chaos, an all we have is this very instant, which has already passed as you experience it.

If you were to believe your social media pages, 2016 is some dastardly villain that has chosen to take so many of our beloved artists, not to mention heroes; as if 2016 actually had a conscience. All those we love and cherish, especially in the arts, need to do is make it to 12:01AM on January 1, 2017, and they will be good.

Don't think that is going to be the case.

That doesn't mean we cannot take this arbitrary date to look back at the last 365 days, and forward to the next. It's our decision, and it makes it convenient.

So, here is a look back at 2016 for me, and a look forward to 2017; keeping to old-school Irish bartender rules, meaning no discussion of politics or religion Them there Irish bartenders knew what they were doing.

2016 started for me with a UPM job, working for a very good producer. We knew of each other's work, and thought it would be a great fit. It wasn't.  Instead, it was proof that there is more than one way to cook a goose - but you have to choose one. I could have been more magnanimous in conceding to how she wanted things done. It was still a very good project, and I look forward to seeing it. A reminder of why I chose to be a Big Fish in a Small Pond (Low budget indies) instead of the opposite, which would have meant taking orders from others, which has never been my strong suit. There was a small project that I served as AD on in October that would also bring this home.

Hours on the literal cushion (Zazen) and the figurative couch (therapy) leads to a whole lot of introspection. Some, including my ex-wife, would call it over-thinking. I had a therapist once dryly tell me, "Oh, you have introspection down pat."

Me? I like to think it helps you not be that old dog that can't learn new tricks.

That did come home, when I had the opportunity to UPM a one-day commercial with the wonderful producer, Aliki, who was my production supervisor on The Indonesian Project. I was conscious of deferring to her and a really good AD, and neither ego nor stubbornness ever got in the way, and it was a great experience.

New tricks are needed all the time in this business, and in the Spring I was hired to produce a PSA to encourage millennials to vote. We prepped for a few weeks, wrapped for one; and never shot one day. Client never approved talent. Told you about that one.

I line produced a 6-day short at a camp with a lot of students and a longtime DP friend, Lauretta, who I had last worked with as DP and Line Producer on Keep My Brother. It was, well, 6 days at a camp. As I kid, I hatred camp. Give me a soft bed and air conditioning and no bugs. Did not learn to love it more as an adult.

However, I did get to teach a little bit to some bright kids, and that is always rewarding.

There were a number of small jobs, as well as line producing a feature in September where I felt like the guy on the Titanic yelling "Iceberg" but no one (neither the producer nor the director) were listening. They basically decided to ignore almost every cost-saving suggestion I had, from not casting actors with conflicts (which cost them the shoot), to not shooting short days, to trying to cut our losses after we lost the second lead, to - well, you get the point. I had to stand by and watch them throw good dollar after bad. They were talented and very nice people, but, in the end, it's always their money.

Then, there was a regular return to working as First AD which I chronicled in the last post.

So, on to that proverbial flip of the calendar and 2017.

I am producing an SVA Thesis film through a program legendary producer Bob Giraldi initiated to have experienced producers work with thesis directors.  It is spiritual without being proselytizing.

I am attached to a project about a wheelchair-bound boxer, and a feature that would take place on a real battleship in Boston.

It looks like I will be able to work on a TV series with a actress and dear friend, Maria, as director.

Maybe one of the things I most look forward to is line producing a film called Sarah Q in early Spring, directed by John A. Gallagher.  John is as close to a NY Indie legend in NYC as you get, going back to successful movies in the 1990s like The Deli, Blue Moon and The Networker. He and I have had parallel careers, and we have no degrees of separation in terms of people we worked along side. John's first producer had worked as 2nd AD for me, and I have worked with many of the same cast and crew people that work with him. Ironically, the lead actress was the lead from the camp movie I did in June, and she is as talented and as great to work with as can be.

Given my opening to this post, you might imagine I do not make New Years' resolutions, but I am determined to do a few things in the new year, including at least directing a short, and writing a short and a feature and getting a few short stories published - or at least done, Maybe get back to directing more stage, if the opportunity is there. I have no illusion I will walk away from the production side, but I am consciously going to pour out whatever creativity I have. At my age, there isn't anything to save it for.

This year ended with a birthday dinner. Shooting schedules being what they are, none of my "kids" were able to make it, and regulars Brian and Adam found themselves stuck on set. However, one of the brightest stars from the last few years, Leigh, was able to make it, as were my spiritual "brother and sister, "Maria and Lanier. I also got to catch up with an old friend from all the way back in my WNYU days, Lisa (not pictured below).

Let me conclude with two truths. As Einstein said, "Time is an Illusion;" and as someone said, pictures don't lie. Looking forward to more "thank you dinners" in 2017. 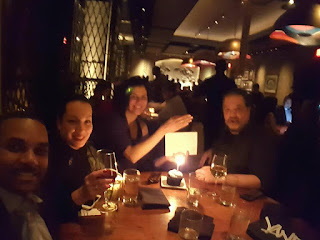 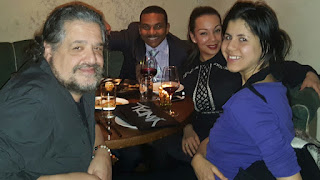