We now move into my work in the early 90s (you were how old?  no, I don't want to know).  It is the period that began to shape who I became as an AD, and later as a production manager, line producer and producer.

After all the talk of the lengthy prep work I discussed in the previous post, my first feature as an Assistant Director was on a film called Walls and Bridges, where I took over after shooting began for a young lady who was fired (you thought I was kidding about that getting fired thing?  This wasn't the last time, either!).

Now, there is an interesting twist to coming on a project to replace someone who was fired.  They want to like you, they really really want to like you.  Why?  Because the person who got fired gets the blame for everything that went wrong up until that point, which works well if you come on and everything goes  fine.  If, however, you come on and things still go badly, then everyone has to take a deep look in the mirror, and people would rather not do that.

I never met the girl I replaced, and what I did learn of her was from the Director of Photography, John Rosnell.  John and I would go on to become the closest of friends, and we would do four more features and countless commercials and PSAs together.  It was through John that I met the person I consider my mentor as line producer, and, later, it was with one of John's partners that I co-wrote my first produced feature.  Those connections mean that no one shaped my career more than John did, in so many ways.

John owned his own camera, a 35mm beast that was the same camera that has shot Clockwork Orange.  It was huge and heavy, and I joked with John often that we needed sherpas to move it.  John was part tough, rugged individual who carved his own path, part cowboy, part geek who invented or fixed or adjusted every piece of equipment he owned, part sci-fi nerd, and full time train enthusiast who had an elaborate train set at his warehouse in Hoboken.

Today's owner/operator DPs usually have digital cameras.  John had a 35mm camera, a 16mm camera, and an equipment list worthy of a small rental house.  One could shoot an entire feature using just his equipment, and John shot a number of them, more than IMDB lists because not every producer back in the day was up on including information.

John will probably best be remembered for the feature Straight Out of Brooklyn, by Matty Rich.  It was one of those feel-good stories (the movie, not the plot) of the early 90s indie scene.  Seventeen-year old Black kid from the housing projects in Brooklyn's tough Red Hook area raises money through family, friends, listener donations from a radio station plea and credit cards.  Lots of credit card movies back in the day, and while the urban myth often led to the reality of a movie seen only by family and friends, that was not the case for Straight out of Brooklyn, which won numerous awards, among them a Special Jury Recognition at Sundance.  The film's official budget was $450,000, though it was shot for a good deal less, and after release by Samuel Goldwyn company, it reportedly made close to $3 million. 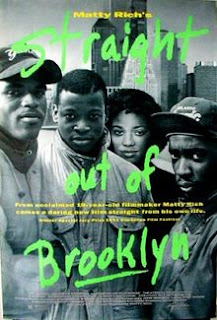 Of John's cinematography, the Daily News compared the opening sunset over the city as the way the bigger-budgeted Dick Tracy should have looked.  John could do amazing things behind bear of a camera.

I worked with some other owner/operators of their own equipment in the 90s, and frankly, many of them were hacks whose only concern was the check they would get at the end of the show.  That wasn't John.  He fought hard to make the director's movie, and he watched out first and foremost for his crew, who often got paid before he did.  There were times on Straight Out of Brooklyn when John paid crew out of his pocket while Matty was raising money to continue.  That was John.

I don't think John particularly liked ADs.  It was part of John's personality to lead, and he always thought he knew the best way to shoot things, to plan things.  However, we got along immediately.  Unlike the previous AD, I did not have my head "buried in paperwork" as John would describe her.  I deferred to him on things technical, asked for his input on things, but kept the schedule running as smoothly as I could (more on that later) and, in the end, took a burden off of John.  He realized life could be good if he only had to shoot and not try to do my job as well.

That doesn't mean John didn't like to remind me of my place at times.  One day, when he assumed we were done, he said "that's a wrap."  I made it clear, in no uncertain terms and in a very stern message to the crew, that only the AD called wrap.  Indeed, on any set, this is true, but I think I went on about it just a little longer than I needed to.  Touchy, anyone?  When I belabored the point, John and members of his crew would take great joy in calling "wrap" under their breath at various points throughout the day.

John's crew became part of my first set of usual suspects, or, more accurately, I became the production guy on a crew of techies.  This is kinda like being the straight-man singer in a Marx Brother's movie.

There is a lot more to talk about regarding this movie, but that will take a number of posts.  I thought it was important to introduce this important person in my career fully, so that later interactions will make more sense.

Among John's crew were the lovely Lorelei as assistant camera and general girl-Friday for John, a second AC, Joe, who had a hyena-like laugh, Russell, a key grip who seemed  more like a general handyman at times, and a young gaffer who has gone on to quite a career as gaffer and DP himself, Jeffrey Eplett.  Jeff had a great sense of the lighter side of set, and could crack the crew up at any time with anything from his dead-perfect Wookiee to his interesting impersonations of famous people doing lines in unexpected movies.  My favorite was probably Jimmy Stewart playing Frank Booth in Blue Velvet.  It gives an interesting insight to how Mr. Stewart would have delivered the line, "you get a love letter from me, you're fucked forever!"

It was also on that film that I became "JB."  As much as it might seem a reasonable assumption that I gave myself that name out of hubris, that is not the case.  Besides Mr. Rosnell and me, there were a few other "John's" on the crew and staff, and it got out of hand pretty quickly on walkie.  It wasn't long before I became "JB" and John "JR" while some other "John's" went by their last name.  Between this film and another I did with John, I started referring to myself as "JB" with vendors, and soon, that was it.  People knew me as JB and not John, and so it began.