Just Sit on the Bed


(N.B.  I said earlier that I would not be a slave to timeline.  This post is one of those examples.  It is a theater story that I recently remembered that happened much earlier than the events in the blog currently, but I thought it was a story worth relating.  It is also an opportunity to talk about a few of the many unsung heroes in the acting community.  Enjoy, and think of this as one of those mid-season repeats – new episode soon!)

Although I spent time as an acting coach and have directed actors in theater, I was never a very good actor.  The last time I acted on stage was in the mid-90s when a fellow I mentioned in the last post, Chris Kelley, asked me to play Jesus appearing on a Springer-like talk show.  It was wonderful and scary.

Acting is easier to explain than to accomplish.  I don’t know the exact percentage of talent to training, but both are needed.

This incident took place during a period where my support job was working as a subscription assistant at New York’s Roundabout Theater.  The Roundabout is known for its great revivals, and this was during the period when Gene Feist was the Artistic Director, and The Roundabout had two stages, one on 23rd Street, and a smaller one on 26th Street off 8th Avenue.

I have been a huge fan of Harold Pinter since I first studied his plays in college, and I saw most of the best productions of Pinter plays in New York.  Among my favorites will always be 1980 Broadway production of Betrayal with Blythe Danner, Raul Julia and Roy Scheider, directed by Peter Hall. 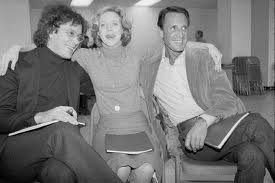 You could not ask for  a better combination of talent; Pinter’s crisp and biting dialogue, Hall’s insight and surgical precision, and three different but remarkable talents, all of whom are under-rated when discussion of great acting comes around.

Blythe Danner’s work is always so seamless as to seem effortless – it most certainly is not.

Roy Scheider is able to give as nuanced yet powerful a performance as any actor; witness his portrayal of the Fosse character in All That Jazz, where Scheider, who is not even a dancer by trade, plays one of the most accomplished dancers and choreographers of all time without, please pardon the pun, missing a beat.  His raw power flourishes in such gritty films as 52 Pick-up or The Seven-Ups, his performance is over-looked for its contributions to The French Connection and Marathon Man.

He later tells the girl (and I’m doing this from memory – my apologies if I’m off by a word or two), “I can’t make you a great dancer.  I don’t even know if I can make you a good dancer, but if you stick with me, I promise I’ll make you a better dancer.”  He manages to make it seem like the nicest complement imaginable.

Then, there is Raul Julia.  His untimely early death robbed us all of one of the truly great talents.  He had some great movie roles, including those in The Eyes of Laura Mars, Tempest, Kiss of The Spider Woman, and Romero.  He was the quintessential Gomez Adamms.  His exceptional talent was best displayed on stage, where I saw him within a few years do Two Gentlemen of Verona and Three Penny Opera.  I remember thinking when I saw him in Two Gentlemen that I’d never seen a sexier human being, man or woman, and to this date, that is still true. 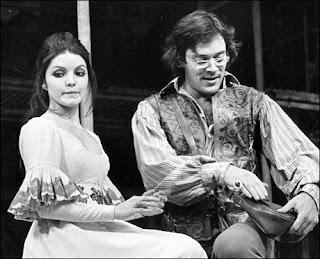 The consummate scene in the film is this one.  The best friend has been having an affair with the wife for years, and the husband knows it.  This scene shows the brilliance of Pinter’s dialogue.  The husband is talking about being on a motor boat – and is not talking about being on a motor boat at all.  It is at a lunch with his best friend, who he knows has been cheating with his wife.  During it, he describes the motor boats in Torcello, and the way they go “whoosh, whoosh” through the water.  Each time, the physical expression of going through the water is the embodiment of his anger and betrayal from both of them.

That scene isn’t available ( I will spare you the one version of it on Youtube – it is from a beginning acting class -  and I like you too much to subject you to it); here is the one where he gets his wife to admit to the affair.  Pinter’s use of language is also on display here:

It is this hidden meaning of every action and word that brings me to a rehearsal of Pinter’s The Caretaker at The Roundabout.  The production, from 1982, was directed by Tony Page  and featured Anthony Heald and F. Murray Abraham.  Heald has been a talented character actor his entire career, often playing villains.  Murray is probably best remembered for his performance as Salieri in Amadeus, for which he won an Oscar.

Here is a wonderful scene from the excellent 1963 movie:

As a subscription assistant, I was usually far from rehearsals, but I was a big Pinter fan, and learned that Pinter would be attending a rehearsal.  It was the first time that Night of 100 Stars would take place in New York, and Pinter was in town for the event.  Gene Feist was kind enough to allow me to watch, as long as I stood in the back of the large theater and remained silent, which, of course, I agreed to immediately.

Pinter’s own quotes can lead to the mystery that surrounds many of his plays, especially his early work.  Wiki points out this oft-related quote:

Much is made of every action, every pause, every word.  The Caretaker is the story of two brothers, Aston, who is mentally-challenged, his younger brother Mick, and a homeless person Aston brings home, Davies.  The play follows the subtle and not-so-subtle shifts in power in the small flat the brothers’ share once Davies is brought home.

In the scene they were rehearsing that day, Aston first brings Davies home.  He proceeds to allow Davies to sit on Mick’s bed.  Much has been made of this over the years, and Heald broached the subject directly with Pinter, asking how Aston having Davies sit on his bed signified the changing dynamic in the apartment, an affront to Mick and a challenge to his control.  Heald was very enthusiastic in his question; he went on for a bit in great detail and it was clear he had done a good deal of thinking on the subject.

Everyone waited as Pinter sat and gave it a good, long consideration – a true Pinter pause!  Finally, he revealed the secret.

“I don’t know.  The old man is tired, and Mick’s bed is closer to the door, but I guess all that other stuff can be true as well.”

It was just closer to the door?  Really?

It was like climbing a mountain to seek wisdom from some great sage and finding that the answer was simple and you knew it all along, and maybe that was the brilliance of it, and maybe Pinter was being playful, but I will always remember that moment as a good example of how sometimes the answer to a given scene is right in front of you the entire time.