or How I Learned to Stop Complaining and Love the Computer

You know the stories.  No matter how old you are, and what generation you're from, you've heard the stories.  Your father had to walk five miles to school in the snow.  Your mom learned math with an abbacus.  We used the old math before the new math, and then we did the new math by hand - long division and all that.

There are no singers these days like when we were young either Rudy Vallee or  Frank and Billie, or, for a different generation, no one like Janis and Grace Slick.  Ok, the latter is absolutely true and I don't want to hear any discussion on it.

In any of these stories, two things remain unquestionably true; first, that we had it harder, and, second, for some inexplicable reason, that somehow harder meant better.

One of my mentors stared producing in the 1950s, and did so up until his death in the late 90s.  When I would complain that we needed more of some technology, whether it was computers or cell phones (back when there were production cell phones and it wasn't just assumed that everyone had one) he would meet me half way, understanding that time never stopped.

Still, when the moment was right, he would come up along side me on set and start a discussion that went something like this:

Him: Gunga Din
Me: Great Movie.
Him: It really is, isn't it?
Me. Absolutely.
Him: No cell phones then, you know.

I worked regularly with an AD a little older than myself who right up until a few years ago used to argue for hand-written call sheets, argue that with a blank call sheet, a clipboard and a pen everything was quicker than doing it in Excel.

I'm not that old school.  From early on, I embraced early versions of Movie Magic in helping to break down, schedule and budget a script, and I would never go back to trying to write a script in Word with pre-set tabs rather than use something like MM or Final Draft (no less the old typewriter and crumpled paper days).

I'm far from a tech whiz - my first "smartphone" was too smart for me the day I bought it and my younger assistant had to show me how to answer the phone.  Still, I do not miss the "old days" before computers (B.C.) became a staple on every set.

However, as we are about to go into a period where I was AD on a number of projects that shaped my career, I thought it an appropriate time to explore some of the ways, in those early computer days, we used to approach the work in the A.D. department.

Rumors to the contrary, I'm not old enough to remember the very old days when all of this was done on manual typewriters, though let me say this.  Anyone who has been around a set, or more so, a production office, knows that one of the promises of technology, that it would reduce paper or paperwork, just ain't so,  If anything, I think the ease of making changes has led to us making more of them, and creating more paperwork.  If you watch very closely on set as the third draft of the call sheet is circulated for approval, or the second set of sides are handed out after key crew loses the first one, you will see a tree in the background, quietly weeping.

So, how I used to approach a project as A.D, with many of the things I do still similar.

Now, stripboards are still used today, at least in name, but they mostly just exist in cyber world.   We might print them out, but few in the indie world actually carry an actual stripboard.

Then, and for many many years before, stripboards were actually wooden charts with cardboard strips of many colors that would represent a script's production schedule.

Here is a good video of most of how the old process was done - watch if you're really interested - its less boring than me describing it:


How to Make a Production Board? -- powered by ehow


Below, from a film museum website (which I am not affiliated with - buy at your own risk).  It shows some of a handwritten board from Close Encounters: 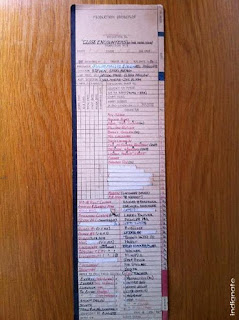 The modern version, whether you use EP or Gorilla Software (my preference) is infinitely easier, and I don't think you lose anything, in fact, the linking gives you more information more quickly in the end.

If you look closely at the above Close Encounters cast header, you will see lots of movement, arrows, and, yes, that marvel of yesteryear's technology, white out.

Ah, do I remember fondly being the 2nd AD, sprawled out on a floor, trying to write tons of information on tiny strips and, if you got them wrong (or things changed, as they are known to do), using white-out or white strips to correct (which the AD always hated).

You rarely saw a 2nd AD without white-out on their fingers.

No, I don't miss the old days.  Yes, computers and the new software are better - by far.  If there was something to be said for the old days, it is that after going through the script all these times, I really believed the AD knew every aspect of the script and the scheduling inside and out.  I believe to this day that I knew the specifics of scenes better in those days than the director did.


In the next few blog posts, I will get into the gigs in the early 90s that really set the table for what these low-budget indies were for me.  I just wanted to give a little overview of the process, then, so you would appreciate.

Of course, some things NEVER change, as is evident from the wonderfully clever video below, made by a current frustrated AD (language warning!).  No matter how you get out the information, people have to READ it!


(A note.  It is totally coincidental that while I had this blog post in my head for some time, I wasn't able to get to it until yesterday, when I was running around without my laptop.  The ironic result is that the first draft of this was written, by hand, in a notebook.  I can only look at it and realize how many poor production members will be spared having to decipher my illegible handwriting).