So, now we were back in prep. It's Monday, and we're going to start filming on Friday for seven days. Because I didn't know for sure we would be able to start up until Monday morning, only Leigh, Arneece, Aliki and Brian were in with me.

Before that, of course, was one more twist in the shooting plan.

On the day we went on hiatus, we were to have a shot list discussion with Rako, the director. It was even mentioned in the producer's email to me discussing the shut down.

That phone meeting never happened, but we still had much to discuss, and Brian and Leigh went to the conference room to get that conversation going while Aliki, Arneece and I dealt with many of the other logistics of getting us back up and running.

That is, until Brian appeared at the door to the office. "JB, you need to come in here." He was referring to the meeting in the conference room.

Over the many years I had worked with Brian, the process had been the same. We would talk before the shoot day, and then just touch base as needed. I would get basic info on how things were running from the 2nd AD or 2nd 2nd AD. Only if it was urgent would I reach out to Brian.

Similarly, Brian handled what needed to be handled, and only when it was a producing issue did Brian call for me. That means in the course of a shoot day, if Brian's number came up on my cell, I dropped everything and picked it up. If I was on set and either Brian came for me or sent someone to holding to get me to set, it was important.

As we are walking toward the conference room, he shares that Rini, the Indonesian-American producer, had informed them that the cast and crew would now be arriving on Friday, and Day 1 would be Saturday.

"Rini, they are arriving Friday?"

"But, with the hard out on October 14th, that means they can only shoot 6 days?"

Rini and I had come to appreciate the absurdity of much of what was happening very early on. We were in the odd and frustrating position of often reiterating to each other what we already knew, sometimes just to make sure we were getting it right.

Often, in these moments, Rini would resort to being Ed McMahon to my Johnny Carson, and she would go to McMahon's go-to line on the old Tonight Show with Johnny Carson, "You are correct, sir;" something McMahon had originally bellowed when he was foil to Carson's "Carnac the Magnificent (or sometimes Great)," a "mystic from the East" who would come up with (humorous) answers to unseen questions. MacMahon, however, would often use this just to agree with Carson.

The Indonesians had learned that since Raisa was the 0-2, they could not travel ahead of her, and with her missed appointment at the embassy, they would all arrive close together. For the most part, now, the Indonesian cast and creative team would arrive in NYC approximately 13 hours before call time on Day 1.

Furthermore, we had a seven day schedule that now had to become a six day schedule, while still trying to retain as much of what they wanted to shoot as possible. After all, it was an expense to come to NY and not only film here, but do so with all the appropriate permits and a mostly American crew. Both they and our team wanted to make sure they got as much as they possibly could get in.

I had done many odd things in my career, but never had I met the director, key creatives and cast for the first time - in-person - on set at call time. We Skyped and used other communication. This meant we would officially do all, not just most,  prep remotely.

I've commented on it before, but it continues to amaze me how much technology has affected not just the camera and lighting side of movies, but the production side. The last two features I've done had offices without one hard line. We have a fax machine - a marvel only a decade or so ago, but in the era of scanning, we never used it. For that matter, most of my young crews prefer texting to even using the cell phones for what they were originally intended - talking on the phone. (This tends to lead to frustration both for me - and for them!)

I remember a photo shop in the West Village where location managers and scouts would stop at the end of the day, have their film developed while they waited, and then taped up location folders, including "panoramas" - which were actually a series of 35mm stills taped together. Now, all of those folders are captured digitally and shared in Dropbox or Google Drive.

We took all of this to the next level. When I wanted to get something across to the Indonesian creative team in a way that was more personal, I would use Google Translate to help find an appropriate phrase. Leigh would spend hours discussing the director's preferences on Facetime.

We did meetings through Skype and one rather ill-fated meeting through Go To Meeting. The latter reminded us that we have become so accustomed to the conveniences of technology that when it fails ( a poor Go To Meeting set-up one day and a Skype glitch another) we find ourselves outraged that we have to "fall back" on "dated technology" such as email and, horrors, the telephone!

What a Brave New World. Not Even Carnac the Magnificent could have seen this coming. 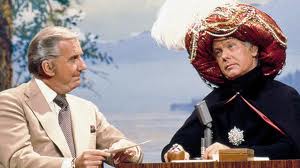 Next time: Rini arrives in New York, prep compressed into four days, and what makes a location iconic anyway?