How Many Assistant Directors Does it take to Change a Light Bulb?

How Many Assistant Directors Does it take to Change a Light Bulb?

This blog has been my way of sharing how this one guy has done all levels of production all these years. I do think it's representative of how many of these things work.

So, it was interesting when a long-time colleague, who writes a blog for the B&H, asked me to take part in an interview about what ADs do. It's part of a series he is doing highlighting different set positions, and it should be pretty informative. He also asked for contact info for other ADS.

I gave him a good number, and as it turns out, he chose two people with whom followers of this blog will be familiar; Brian Bentham, my longtime partner-in-pain on set, and Leigh, who I met a little over a year ago and who I think is a bright shining production professional for some time to come.

I will let Steven Gladstone's article speak for itself - please click the link in the title. For me, what was interesting was seeing different takes from ADs spaced a little less than a generation apart from each other.

By the way, if you scroll down to the bios at the end, Leigh shares her own blog on the art of being an AD. We can always use more of those! 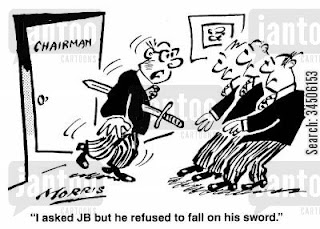 Sometimes finding the right photo for the post is hard. None, though, was easy as this one - a layup - as the author actually chose to title the person who refused to fall on his sword "JB." Photo and caption all done for me. How convenient!

This fortuitous find kept me from trotting out my Christine Vachon quote from Shoot To Kill: "It's all my fault. Now can we just move on?" (Ok, so I still managed to get it in here)

It's probably true in other businesses as well, but folks in this business often want responsibility, but are not always as willing to take responsibility. The good ones do.

We weathered the many delays pretty well, with the exception of having to come up with locations at the last minute. One of our replacements for "iconic" locations was a theater as part of the replacement for Grand Central Station, because Raisa is a singer and we got to put her on stage.

After originally going after the Apollo, and then realizing it wouldn't work, we secured a verbal agreement on a theater where a friend had an Off-Broadway play running on the Friday before our Monday shoot. We didn't have a signed agreement with the owner of the theater until we actually got there. All of this meant that we had no time to get permits from the Mayor's Film Office for our exteriors of the club, or the our one company move that day, the closest park for the final Magic Hour sunset shot.

The day went relatively well, with sidewalk walk-and-talks being no big deal. We had a hard out at the theater (they had a show that night) and while we wrapped camera in way enough time, getting gear and such  out cut it close.

The theater staff - the Production Stage Manager, a lighting tech and a rep from the owner - were great and made the experience a lot of fun. The Indonesian team got everything they wanted.

And, then, there was the rush for the Magic Hour shot.

The word "idiot" comes up in front of many things. "Idiot check" - that check you do to make sure everything has been taken out of the space when you leave and that nothing is left behind - is a perfect phrase because what seems obvious often is not.

That morning, Brian (AD) and Leigh (PM and LM) and I had made a point of explaining to the Indonesian team that we did not have a permit for the walk-and-talk outside. In fact, it was borderline, under the new rules, whether we even needed that permit.

The important Magic Hour shot - it would be the last shot of the movie - we did not discuss. We had scouted a park, and thought we could get a shot off.

Somehow, none of us - Brian, Leigh, nor I - told the Indonesian team that we did not have a permit for the park.

Between that and the fact that we were rushing to make sure the light was right, the company move was a little hectic. Leigh was trying to make sure we were out of the theater on time, and had left her assistant with specific instructions of who should be in each vehicle and in what order. Somehow, her instructions weren't followed and the move was choppy.

Worse, by the time we set up at the park, a park official came by and shut the shoot down.

We knew we had another opportunity to get the shot later in the week, but with all the good work we had done, it was our first fail. The Indonesian team had not complained about anything to that point, and my experience with them was that it was not in their nature to be difficult. Still, when they got back, they were clearly disappointed.

I could see from their questions that they were disappointed with our team, and as it was a location issue, I could see how the blame, such as it was, could fall on Leigh, as their questions were directed toward her. This was completely unfair, and I knew I had to nip it in the bud.

Again, there was no way, given the late notice, that we could have gotten that permit. Why none of us mentioned it to them eludes me, other than that with all of our discussion that morning about not having permits outside, we thought it was understood there were not permits for the entire day.

Another reminder that in our business, nothing is obvious.

The rest of our team had worked too hard and too well to have any doubts about their ability remain in the minds of the Indonesian team, and that night, I wrote a heartfelt email to the director and producer, apologizing and taking personal responsibility.

I have worked with too many producers over the years who would find blame with everyone else but themselves, who were quick to accept thanks but would never accept responsibility for things that went wrong.

It wasn't easy writing an email that basically said I screwed up, but it was what I had to do. It is also a lot easier when you reach a certain age and you are pretty comfortable in your own skin. Any regular reader of this blog knows that I have had my share of grief sent my way over the years, and a little more wasn't going to kill me. The same can not be said of Brutus.

Although these things tend to be sketchy in terms of history, a little research suggests that the term "falling on one's sword" dates to Brutus, and this account from Plutarch's The Life of Brutus:


Finally, he (Brutus) spoke to Volumnius himself in Greek, reminded him of their student life, and begged him to grasp his sword with him and help him drive home the blow. And when Volumnius refused, and the rest likewise...grasping with both hands the hilt of his naked sword, he fell upon it and died.

Clearly, Brutus didn't work on a film set, where neither Volumnius nor anyone else would have refused to help. In fact, the grips would probably build a rig to facilitate it.

The director wrote me back a very nice email, basically saying that he understood. It was a relief. As it turns out, we did get the shot on our very last day - but not, again, without its share of drama.

As with the Asbury Park scene in Lucky Stiffs, some scenes just seem to be haunted, or looked upon with disfavor by the Film Gods.

Oh, they do exist, and while they do not always require a human sacrifice (it's why I sometimes hire an extra PA - just in case) they require a hearty mea culpa now and then.