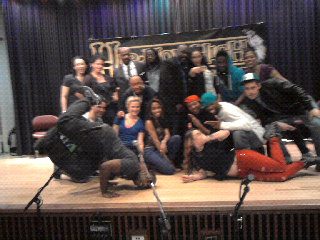 Remember your first love?  She was as beautiful as could be and and she loved you with all of her heart, and your time together was magical.  At least, that's how you remember her.

A more objective account might remind you of the fights you had, that weird thing she did with her eyes, and the fact that she left you for a second-string quarterback (not even the starter!)

Impressions of our first loves improve with time and distance, and so it is that when I think of my early days of working in theater as a stage manager, I remember how excited I was when I picked up my script and read it for the first time on the way home on the subway, and the comraderie I shared with those early casts, all of us pulling together to put on a show!  No doubt, the two-hour performances in front of ten people, the difficult actors or directors, the light board that never seemed to work correctly and the show you were embarrassed to tell you friends about because the script was so bad have faded in my memory with time.

Still, this is the way I remember my early theater days.

Many of my film friends have expressed frustration with the current state of indie film. Me too.
So it was that I got the opportunity to stage manage a hip-hop musical called "Hip Hop High".  One of the first things the director mentioned was that it was a cast of 15, including many teens.  I will not lie; my first thought was "how much Valium could I fit into a Pez dispensers?"   I had the image of out-of-control creatures at the mercy of hormones, or maybe spoiled stage brats, or both.

I was pleasantly surprised to find that none of that was true, that the cast, which ranges in age from 12 to 30s, most in early 20s, was among the most pleasant to work with I have ever experienced.  In any cast -  film or theater, there is always someone who gets under your skin.  In this cast, not a one.  Additionally, the director, musical director and producer were all seasoned pros without a trace of ego.

My last post talked about prima donnas in film , but theater has no shortage; indeed, the term started in musical theater (opera).  These folks - great.

One of the first things I loved about it was the chance to work with old tools - prompt book, stopwatch, etc.  I felt like Sweeney Todd with his knife back.


Monday night, we had a performance for potential producers and industry.  When you're working on a show, you can feel every little imperfection.  At intermission I could sense that the cast was feeling all the slight flaws, the moments they had hit better the previous week during a preview,  the places the energy could have been better.

The audience, of course,  doesn't know any of that,and there were no obvious gaffes.  The audience responded to the very original and entertaining music and the talent and energy this cast brings, and the response was enthusiastic.

I don't know if this show will get picked up; indeed,  I find it amusing to be working on a workshop looking to move to Broadway while on television enjoying the new NBC show SMASH, which covers a very different show on the same path.  Luckily,  we don't have half the same backstage intrigue.
After the show, the director, the producer/Creator of the show and a few cast members closed a small Mexican-themed restaurant in the wee hours discussing the play.  Man, it was one of those discussions that I thrived on in my younger days, esoteric and artsy with nary a mention of the sort of budget and nightmare issues that come up when line producing.

There I go again,  waxing nostalgic when in fact those gritty nuts and bolts issues will need to be addressed by the producers if the show is to move to the next level, and forgetting that we in film have these discussions as well.  The difference is, in part, the immediacy of live theater,  the feedback that doesn't go on hold for months of editing.

I don't know the next step for Hip Hop High.  In a few days, we will have a recording of the showcase courtesy of the producer, a prolific film and music producer named Zman.  I will try to share it here then.

Whatever the future of the show - and I feel it has one - I know I will look to cast some of these cast members in future projects of mine, and hope to work with the producers, musical director and stage director again.

Thanks for this indulgence.   Next post, its back to The Rook, where you will get to meet a very heady and esoteric crew.