The Rook - Part 6 - Crows and Confusion 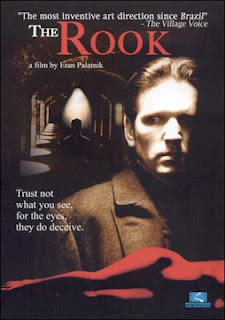 'Do you realize they've distanced themselves from the church?'' he says. ''They don't even believe in the tempting. The spiritual reunion.'' This is the most detailed description we hear of the dominant religion of this time and place.


The quote from the NY Times review above gives a good deal of insight into the end of production and the afterlife of The Rook, which, in terms of my career, was almost more important than the shoot itself.

Principle photography ended with our adventures in Mohonk, shooting not only along the mountain but in the  pristine wooded areas below, which worked for the sense of timelessness.

We came in pretty much on schedule.  While the original hope for the budget was even lower, the final costs after the first cut of the film was a lot less than films that are shot digitally today, this for a film shot beautifully on 35mm with great art direction that, to some extent, became a cult classic.

I went on to do movies with  Van, our AD, and Zack, our DP.  Charlie, our gaffer, was an important DP and camera person with me on future projects.

What influenced me most for years to come, though, was my relationship with Eran one of those instances where things that seemed like problems turned fortuitous, beginning with the arcane state of petty cash accounting previous to my arrival.

I recently worked on a small art film project as AD where the line producer neglected problems on set, with the excuse that he was dealing with the budget, which should be part of the job, not the entire job.  I kept us up-to-date with our current expenses, made sure we had enough money to finish the project, and worried about where the money spent previous to my arrival fell later.

Once we wrapped production, I stayed on to help with post-production, and spent time finishing up the accounting.  Those days were less stressful than production, and where I truly got to know Eran, the director, as an artist and a person.

Eran had no interest in doing what others had already done, and while this led to a certain level of frustration for him, it matched elements of my personality.

All my life, whenever I got bored, I moved on; schools (transferred high schools after sophomore year because I no longer felt challenged), majors, apartments, relationships (sadly), and mostly jobs.  While freelancing has it's financial problems, it should mean each project is a chance to start anew.  Unfortunately, line producing can be a grind, especially when people's idea of being innovative is copying other innovators.

Eran was unique, and if he found something that worked, it meant it was time to move on.

He worked closely with the original co-producer Alan to edit the film, using a combination of intimidation and support that was his trademark.  That cut lead to a very successful experience at Mystfest, where The Rook took awards for Best Director and Best Screenplay.  Eran and the movie were very well received at that festival, and it lead to our first direct-to-video sale.

Like most filmmakers, Eran sought theatrical distribution.  In many cases, this means making the movie more palatable for a wide audience. Not Eran.

Reviews and reactions fell into three categories: the good, the bad, and the confused.

"This picture looks as though it were written by a committee, but not your usual group of Hollywood honchos brainstorming in the backlot of Universal Studios. The panel would be composed of Franz Kafka, Soren Kierkegaard, Jules Verne, Sigmund Freud, Edgar A. Poe, and George Orwell. They'd bat around some ideas for a fiction, cramming their signature elements helter-skelter into a one-hundred page manuscript. The novel would eventually fall into the hands of Richard Purvis, looking to compose his first feature screenplay, and Eran Palatnik, seeking to direct his first feature movie. A limited budget would allow these two fellows only eighteen days to shoot the genre-bender which, in just 84 minutes, could be classified as noir, sci-fi, horror, political, or what-have-you, but not comedy, as the dialogue lacks humor and its principal performer never smiles. "

Turns out "The Rook" is better than you might expect, an intriguing detective story whose pieces come together only in the concluding moments with a production design that mixes clothing from the early 19th century with outfits of 1950s design and positions a computerized office against the English countryside circa 1800. (Harvey Karten, PhD)

The Rook is effectively atmospheric, and there are occasional scenes that function as pointed political commentary...(Reelview)

"The most inventive art direction since Brazil" (Village Voice)

But the narrative never comes through with the information -- any information -- so the experience of this generally soporific 84-minute film is that of being teased and abandoned.

...but the main story doesn't work. The film is dull when it should be engrossing, and the material is stretched ridiculously thin to reach feature length. Donovan, who typically plays understated roles, virtually vanishes into obscurity -- Cross has no personality. (Reelviews)

This sluggish bundle of stylized anachronisms is intended as a genre-leaping mind puzzle, but even the most patient auds will give up the game long before its drawn-out denouement. Look for a quick move to video.(Variety)

In both the good and the bad, there was the confused:

We also never know who the revolutionists are, what the revolution is about or where (some imaginary country?) all this takes place. (Greenwich, where Abbott lives, is apparently not far from the town of Sutheridge, where the film takes place. And the murder victim is from Carmel, but something tells me that's not in Northern California anymore.) O.K., it's an allegory, but of what?  (NY Times)

Confusion continued with the title, and even this PhD gets it wrong (oh, how confused he is!):

Palatnik means for us to figure the significance of the movie's title, and if I may take a stab at it...a rook is the chess piece representing the castle, in this case the particular citadel of Kafka's story which was made into the film "The Castle" in 1968. Rudolf Noelte's movie starring Maximilian Schell is, like "The Rook," an appropriately vague filmization of the novel in which K, a land surveyor, is called to a castle for work but (like John Abbott, at least symbolically) is unable to gain admittance. (Karten/IMDB)

In fact, this is the inspiration for the title:

These members of the  crow family work as a unit to solve problems, but one of the more interesting aspects of their behavior is how they reportedly deal with dying members.  They will surround them, then kill them.  As usual, it had nothing to do with one might expect at first glance, namely, the chess piece, though chess would seem the more obvious reference for a mystery.


Eran's response to all of this was to completely re-edit the film with at least two different editors over the years, at no small expense, and the re-edit, if anything, made it more mysterious.

Eran and I went on to attempt other projects, but finding a script that inspired him was difficult.  Eventually, we wrote as script together, an erotic-romance piece called Avalon of the Heart, and I will document the experience of writing that and chasing the funding in a future post.  That would come way down the line.

Working with Eran was always challenging, but never boring.  He liked it that way - and so did I.

The next challenge I would face would be one of my few experiences as 2nd AD, a job that does not match my skill set well, and it was with the First AD on this film, Van.