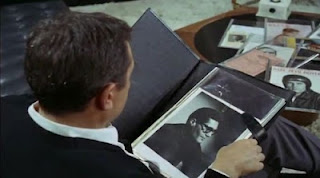 I'm going to share a secret with you, but I suspect that, in one form or another, it's a secret that many people carry with them.  By sharing, I hope that others can come forward and tell their stories.

When I approach putting together crew on a film as line producer, I think of myself as Jim Phelps from the old television show Mission: Impossible.

Let me be clear: at no point do I think of myself as Ethan Hunt, the Tom "this-is-me-as-a-serious-driven-person" Cruise character who updates the IMF team.  To be honest, I had forgotten that in Season 1 on television it was Steven Hill as Dan Briggs, before the producers decided that they could not deal with Hill's insisting that as a devout member of the Jewish faith, he could not shoot on the Sabbath, covering after sundown on Friday through Saturday. (Many years later, Law and Order creator Dick Wolf found a way to make it work, and Hill's Adam Schiff, clearly modeled on longtime Manhattan DA Robert Morgenthau, is still the most believable, New York District Attorney and the one I think of when I think of L&O). A film producing partner of mine once called Hill one of the great "chair actors" of all time, largely because unlike actors who like to strut their stuff, most of Hill's best scenes seemed to take place when he was seated.

Everyone remembers the opening, the Lalo Schifrin theme, the match, and maybe even the weird places Briggs and, later, Phelps, would go to listen to that tape that would self-destruct.  Fewer may remember my favorite scene, one that was even given a name - the Dossier Scene.

In that scene, Phelps (Briggs is pictured above) sits in his very nice apartment and pick his team from a dossier that had many pictures (it never seemed weird that most of them were professional actor head-shots?).  The ones he did not choose took on added meaning over the years, becoming a status symbol for people involved in the studio and production to be included among them.

Week after week, he inevitably chose the same people.  After all, neither the lovely Cinnamon Carter or the elusive Rolland Hand (real life husband and wife Barbara Bain and Martin Landau, respectively) were ever rejected.  Spock (Leonard Nimoy) showed up after a time, and there were the other regulars, but if a new person was chosen for the mission, that person inevitably became like the non-starring character beamed down from the Enterprise on Star Trek - doomed to be the one who didn't return just to make the point that not everyone makes it back.

While I don't think everyone thinks of themselves as a the leader of the IMF, I suspect that many people go about their business thinking about fictional characters that might represent them.  How many dissatisfied postal workers thought of their boss, "he wouldn't like me when I'm angry," or cheap private detectives following cheating husbands saw themselves as Sam Spade, or people writing obits on some small town newspaper wonder if their editor realizes that they have a "spidey" sense.

For me, it was Mission: Impossible, except that unlike Briggs and Phelps, I sometimes picked the photo that I should have set aside.

Many people don't appreciate how much crewing a film is like casting a film, finding the right mix of people who complement each other.  It is not just about collecting a group of "all-stars," as there are times when talented people have different styles or personalities that make them a bad fit, and to some degree, I was guilty of ignoring this on Paper Blood.

Phil, the director, was a talented shooter in his own right, not to mention an excellent editor.  On smaller corporate projects, he could work as a one-man band, and that allowed him to move quickly without
having to explain what he was looking for to many people.  Jonathan, his cinematographer, also worked best with few assistants.

I was brought on the project by Greg, who was associate producer and first assistant director.  He was also friends with Phil and Donna, Phil's wife who was also one of the producers, along with Steve, who wrote the script.

I came on board late in pre-production, and I immediately fell in love with Phil and Donna.  They were generous and kind people who cared about the people around them.  We shared basic sensibilities about how people should be treated, something that was not always the case on other projects, where ego led certain producers and directors to think they had been annointed by some film god to make a movie, and all others should be happy to serve them.

Ray was a gaffer who I had known from the time he was a best-boy electric, and he worked with some members of JRs crew, notably Jeff, JR's gaffer.  Our running joke about Ray was that he could find juice (electricity) in the desert, and I don't doubt that he could.  Ray was an expert and a perfectionist,, and people on other projects loved Ray.

Ray also loved Ray, and was very aware of how good he was.

Like many a gaffer, Ray saw himself as a cinematographer down the road, and he had shot some small projects.  As such, he considered himself a partner with the DP, Jonathan, an artist.

Jonathan and Phil considered him a gaffer, and that led to some issues.

For one, while Ray was very good, he would often take a little extra time to do something special.  I remember one night in particular when I thought we were lit and ready to go, and Ray was still lighting.  Ray and I got along well, so he shared with me what was causing the delay - a gobo of a bird and nest in a tree.

This may not sound ridiculous on the surface, but if you knew Jonathan, and especially Phil, this type of thing would drive them up a wall, and I couldn't disagree with them.  For one, I could barely tell if it would even read in the scene, and it wasn't something Phil cared about in the least.  Phil felt this sort of thing was costing him time with his actors, which was his main concern.

Another problem that developed was that while Phil and Donna tried to be inclusive, Ray very much thought of the grip and electric department as his team, and they felt the same way about him.  A very unnecessary feeling of "us" and "them" developed, where the grip and electric team felt that they knew better than Jonathan and Phil, and that wasn't healthy.  Phil, for his part, didn't see why, as director,  he needed to impress the grips and electrics, and, of course, he was right.

It could have made for an ugly situation, but as I was close to both parties, I was able to smooth things over, with the exception of one time when I seriously thought Phil and Ray might come to blows.  They did not, and the tension I described would not have been obvious to anyone who was on set for a short period of time.

Phil developed a dislike for big crews, something that would surface again on the second project I did with Phil and Donna years later.

Ray was good - very good - he was just not a good fit for that project.

Sometimes I worry that I am have a little dinosaur in me, and my love for traditional crew set-up ignores what can be accomplished with fewer people.  Slowly, I'm getting over that, but at the time we did Paper Blood, I was still a big believer in the big, full, crew, and if I'm honest, I don't think it served the film well.

While I remained close with Phil and Donna for years, there were other places where our styles didn't meld, and other challenges, which I will cover in the next installment.