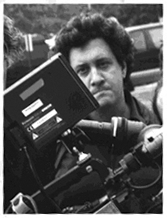 Those who follow this blog regularly know the admiration and respect I have for Raymond DeFeilitta, a writer/director I was lucky enough to meet when we were both embarking on our film careers.

As good a director as Ray is, what really sets him apart for me is his writing. It is sharp and precise, often laced with a dry humor that refuses to judge his characters even at their worst. From his first feature, the smart Cafe Society, through the warm-hearted Two Family House and 2009's successful City Island, he creates characters whose biggest flaw is being human, sometimes too much so.

His blog is first in my list of industry blogs because he has an endless amount of knowledge of film history, and he shares it in an entertaining way. Your film history teacher was never this funny.

His love for film is something that certainly passed down from his father, Frank DeFelitta, a talented writer/director in his time. Ray recently produced and directed a documentary, Bookers Place - A Mississippi Story, based on an NBC news documentary Frank did during the turbulent civil rights movement.

He blogged the entire experience of making City Island; that is how his blog started. Like all indie films, it was a road that had its share of bumps, including finding leading actress Julianna Marguilies just days before shooting began.

I know many aspiring filmmakers follow this blog, so I'm letting you know of what should be another interesting ride: Ray is blogging from Day 1 of pre-production the making of his new film, Rob the Mob.

Whether you are an aspiring filmmaker interested to see what the process is like from the director's perspective on a day-by-day basis, the emotions and experiences still fresh in his head, or an experienced filmmaker who can commiserate with the process, or just someone who likes good writing, the process should be fun.

The link to Raymond's blog is to the right, but, in case you don't feel like scrolling, here is the link to the beginning of the series. I highly encourage you to check it out.
Posted by JB Bruno at 10:15 AM

Wow, I'd ready that guy's blog but...man, how about a little formatting? It's just one big blob of text...impossible. How about a space here and there or a paragraph indent? :)