"One must never place a loaded rifle on the stage if it isn't going to go off. It's wrong to make promises you don't mean to keep."
- Anton Chekov

Shakespeare wasn’t the only one to set down rules of drama, and Robert McKee* was certainly not the first. Before we were encouraging young screenwriters to “Save the Cat”** the great Russian playwright and storyteller Anton Chekov, has come to be known as “Chekov’s Gun,” and it’s a principle most dramatists and theater directors know, and certainly familiar to many filmmakers.

Similarly, if a character in a movie says “How bad can it be?” or, more ominously, “What could go wrong?” you know the answers are very and everything, respectively.

So it was on a Spring day in 2000 that two people walked into my home office (I was living in a loft space where I actually had a separate office at the time) to discuss a job that would be shot in Florida in the upcoming weeks.

The two fit into the “Somewhere Man” category***. If you work in film, you know what this is: someone mentions a name, and your immediate thought is “I know that name from somewhere” but can’t remember what category they fall into.

The next step is to go through how well you know them. Was it a Film Encounter of the First  Kind, where you heard the name? The Second Kind, where you met them at some odd networking event and immediately forgot them after you took their card? Or, was it that valued “Third Kind”**** where you actually worked with them on a job?

It turned out to be a version of the second kind. We had mutual contacts in the business, and had spoken on the phone once or twice regarding a project that never happened.

While most of my career was features, these two folks had done mostly music videos, something that I only did on occasion. This was why they came to me to co-produce and line produce.

At this point, I have to invoke the pseudonym rule, although in this series, folks who will not be bothered by real names will be used (you will see where this goes later in the series).

Let’s call the director Jimmy and his girlfriend, who also was his music video producer, Jane. Jimmy was an Irish-American kid out of Boston who did his best to seem as if he came from the ‘hood,’ which he most certainly did not. Anyone can wear their baseball cap backwards.
Still, he was good at diercting music videos, and this is what got him the contact for the movie.

An iconic hip hop artist who lived in South Beach had contacted him about doing a movie. As it turned out, the “movie” would basically be a feature-length music video - think “Purple Rain” with a lot less plot and genuine acting set in South Beach and not Minneapolis.

The hip-hop artist - we will call him Lex - had convinced a record company to finance this, He would be paid an artist fee, as well as be compensated for services he provided (such as use of his offices in South Beach).

For those who haven’t worked on music videos, music companies (at least at that time) would typically do a draw down that was something like this: 1/3 during prep, 1/3 at end of shoot, 1/3 when delivered. While draw-down’s happen on features, this set up would be almost unworkable for us, as a larger portion of the budget is spent when equipment and other costs are paid at the beginning of principal photography. We worked out a slightly better draw-down, but still had to get to Miami on our own dime and wait for the first payment, so we worked it through Jane’s production company, which footed the bill for costs until the first payment came in.

Jane was originally not going to involved as producer, but as I was not about to front money to shoot the film, she and her company came on board, and she came to Miami as one of the producers as well.

What happens when you take a feature producer with little experience with music videos, a music video director with no experience with features, that director’s girlfriend and producer alternately watching out for him and chastising him, and a hip hop artist whose favorite pastime is getting over?

Throw in South Beach culture, a hurricane, the Met's Playoff, three pimps from Detroit, a BIG hip hop artist, and, well, more South Beach,  and what can happen?

Although “Living in My Oblivion” may be my first official “blog,” it was actually this shoot that inadvertently got me started writing about my career. From early on in prep, I started writing a small group of friends back home a series of emails describing what was going on, and those emails soon turned into a story that these film friends insisted I needed to share. Before Blogger and Wordpress, etc., there was a site that had people post stories on things they knew about, and that is where these stories first appeared.

When I wrote those, I took them from the emails, which, sadly, have long been lost to dead computers and too many moves. As such, I will need to share “The South Beach Job” from memory, which, at my age, gets a little tricky. However, so many of the details of that shoot still stay with me that I trust not too much will be lost.

It is with this assurance that I place this figurative rifle on the wall with the assurance it will most certainly go off. 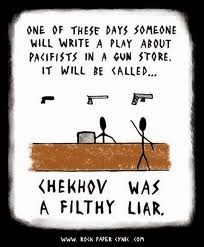 * A former business partner made Robert McKee's "Story" his bible for writing, making it a hated item for me.
**As overly-complicated as McKee's "Story" is, in my opinion, the catch-all "Save the Cat" is too simplistic. There are certainly great writing guides - but I think these two are over-rated. Spare the hate email - just my take on the idea that any one book can make anyone a writer.
***Somewhere Man - forgive the Beatles’ reference to "Nowhere Man." The whole 50th anniversary  on the Ed Sullivan Show was so badly mangled by the Grammys that I'm still trying to figure it out.
****Apologies to Steven Spielberg.

N.B. This is a story that is hard to obfuscate, as the local and the description of some of the artists narrows down the field. For that reason, I will use real names for folks who would likely laugh if they read this.

The title reference is to all heist-gone-wrong movies.