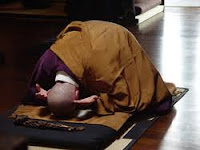 In most spiritual traditions, these solemn promises are not only promises to do something, but promises to stop doing other things. Acknowledgement that we have done something that causes harm, and that we will stop doing that.

Let's start with old-school (as in my Catholic upbringing) confession.

Forgive me, readers, for I have transgressed. It has been eleven months since my last blog post.

Now, I have made this vow before, and this is the thing about vows. Even most of the world's great spiritual traditions acknowledge that when we make these vows to change, we will, at times, fail. Look at the wording of the the Ashamnu, or the Bodhisattva vows above, and we see they clearly acknowledge the daunting nature of the task at hand.

Writing is one of my great joys, and also, as with most writers, one of my great causes of suffering. Because I respect the written word so much, I find myself overly critical of my own writing. I've addressed this in these pages before, as have countless writers over the years.

It isn't writer's block or, more precisely, it is not a block on writing, or wanting to write, but rather, the ability - the need - to write well.

I can suggest so many reasons for the block. The feeling post-Trump election that nothing mattered. The sense that I was so far behind in the timeline that I'd never catch up; and, if I am truly honest with myself, the dread that no one really cared.

What was missing was the inspiration, to write and craft posts that honor the craft - or at least these pages.

That inspiration came from an unexpected place - the "#me too" movement that came to light in the aftermath of the Harvey Weinstein shame. It was an flurry that became an avalanche, and it moved me to start drafting a "I Am Harvey Weinstein" post.

Tragedy affects different people differently. As an elder (over 40 would be an elder in this business -and I'm way past that) I get introspective when these things come to light. I did with the #safetyforsarah. It did with the election of a proud bigot. It did again with the Weinstein incident, as it made me look at the issue of treatment of women on a more micro level on the smaller indie films that I and other men are need to investigate.

However, I needed to do this first, and then a few other posts in order to "catch up." Oh, I will get back to the short film where I met my spiritual "kids," but first I need to get things in perspective. I needed to get this post done. Then, one that catches readers up on the last year since my Casey Affleck post. How ironic, that the #metoo movement inspired me to post again, given Casey's reported history of abusing the women he worked along side.

Ironies abound. That, in adding Weinstein to the "labels" for this post, I noticed that the name of one of the most powerful and influential figures in indie films had never before come up in a blog about indie film.  While I doubt Harvey would care about me, I like to think that he is in some way disappointed that his influence does not permeate all corners of the indie film industry.

The blog is back I vow to keep it. I offer three bows, in the pictures above, albeit from different spiritual traditions.*

Feel free to hold my feet to the fire.


*Any look at different spiritual traditions around the world will reveal how many more similarities there are than not. Different paths to the same place.
Posted by JB Bruno at 3:08 PM