I had some problems shooting that film.  I was having trouble with the crew.  I'd select a certain camera set up, and the crew would argue with me, saying that if we shot the film this way or that it wouldn't cut.  So I told Orson (Welles) this and he simply told me, 'Tell them it's a dream sequence.'  So I did that, and the crew starts to fall over themselves to help me.

- Henry Jaglom  on advice he got from Orson Welles


We used to joke that the two jobs that newbies can do on set without much experience are PA and director.  That is not entirely true, as production assistants must know walkie procedure, lock-up procedure, and more, but I've seen those skills picked up pretty quickly.

The director part is another matter altogether.

In Hollywood, writers are sometimes allowed to direct their own films, actors are given their shot, and that turns out just fine in some cases.  People with no film directing background like Nora Ephron often hit home runs right out of the box.  The rule of thumb is that the keys to a first-time director succeeding are a good First AD and a good Director of Photography.

In all of the arts, we shroud certain positions in mystery so as to deter the faint of heart from attempting to conquer them.  Directing successfully involves many challenges, high among them the suspension of disbelief, not only of the audience, but of the cast and crew.  Beyond actually being able to direct, you must look like you are able to direct.  Remember, on low budget indie sets, much of your crew is made up of aspiring directors, and each of them is silently (we hope) measuring you up to see if you are up to the challenge, or if they could do it better.

Over the years, one of my priorities as a First AD or line producer for a first-time feature director is to make sure they look good on set.  A crew will work harder and give more when they feel they are part of something special, and that the director knows what he or she is doing.

Why should it matter to the crew?  They are getting paid, and, after all, aren't they working for the director?   The answer, of course, is that in a perfect world, it shouldn't matter, and they should automatically be there to support the director, but since cast and crew are made up of human beings, they need to be motivated to do their best.

Nothing is worse than that moment when the cast and crew start to question the director.  You see it in little things, like an actor questioning playing a scene a certain way, or a DP making a face when the director asks him to set up a shot a certain way.  It's an attitude that spreads like a virus on set, and it does nobody any good.

It's why I can often be seen whispering in the ear of the director, literally.  I was working with a first-time director on a short once where the director was having a really hard time getting what he wanted out of an actor.  I made an excuse to get the director off set for a moment, and made a suggestion.  The director, a really good-hearted guy, shouts out, "That's a great idea!  Why don't you tell him.  You can explain it better."  He was being genuine, but I wish I could have put my hand over his mouth.  I didn't need the pat on the back, and I didn't need everyone to know it was my idea.  I would have much preferred if they thought it was his idea.

I've said it often; someone is gonna direct, and if the director doesn't do it, someone will.  Sometimes its the lead actor, or the DP, but someone will.

So it came to be that the First Triumvirate was formed on the set of The Bet, with considerable more success and much less blood than the first First Triumvirate.  This union was formed out of necessity, and it was one that made Adam, the director, very happy, even though he was often only an adviser to the ruling parties.

Adam was about 70 at the time, and his experience directing included a few stage plays and radio plays.  At the outset, he would stage the scenes much as you would a stage play, with the actors playing to a non-existent Fourth Wall.  This led to the problem of how JR could actually shoot this and have it work in a cinema.  It would mean playing many of the scenes in long, talky masters, with odd angles for coverage.

Adam's joy came from working with the actors, from discussing motivation and giving extensive background on the plot and the characters.  This is great for table reads and rehearsals during prep, but really time-consuming on set.  Still, it was Adam's money, and it was what made him happy.  What Adam did not enjoy was discussions of coverage.  This is how the First Triumvirate was formed, first unofficially, and, eventually, pretty overtly.

JR, Christine (the script supervisor) and I would discuss the scene.  I would block it so that JR could shoot it, JR would come up with the best angles, with Christine laying out the coverage.  While we were doing this, Adam could talk to the actors to his heart's content.  He actually seemed relieved that everything just seemed to be working so smoothly around him.

Everyone got used to the arrangement, although I insisted there were certain boundaries we would not cross.  We were shooting on 35mm film, and exposing more film than needed is costly.  Adam had a habit of getting so caught up in watching the scene that he would forget to call cut.  He asked me if I would do it, and I thought that was going a bit too far, so I would tap him on the shoulder for action and cut.  That worked out pretty well.

I have to point out this was a strange and unique situation, and it's not something I've ever done since nor is it something I would recommend or condone.  The pure AD in me still cringes as I write this, because it strays into territory dangerously close to disrespecting the director.  In this case, the director was also the producer, and he was funding the film with his own money, and allowing him to go through all of his money and not make the movie or have a movie that wouldn't cut was not a very good option, either.

Plus, we had the advantage Orson Welles mentioned earlier, in that we had a number of dream sequences.  The lead character agrees to be imprisoned for ten years in order to collect on a bet, and he begins to hallucinate.  He dreams of many things, often of his girlfriend Violet in, among other things, angel wings. 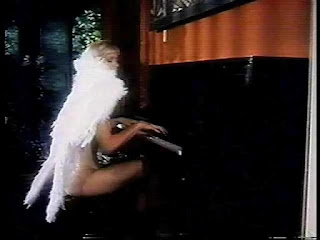 No, she isn't naked there - it's a good costume -  but many of his dreams about her are carnal in nature, including wondering what she is doing with other men.  All of this is pretty much in a PG sort of way, as the sensuality is more suggested than shown.

Lest you think the director was a feeble, silly old man, he wasn't.  He was very sharp on other matters, a successfully published author and authority on literature.  This process served him well, and given that JR and our crew had worked so long together, it kept the ship running pretty smoothly.

This blog is far from the only one to share movie set war stories, and the key to war stories are the brushes with near disaster, and not like that fabled army report of "all quiet on the Western front."  What many of us don't remember is that the disastrous days are the exceptions, that if we are doing our jobs, most days the work gets done, and gets done properly.  There is little fun in regaling others in tales of work days when you shoot the call sheet with little problems. (OK, ADs love these stories, because it shows how sharp we are. "We shot 7 2/8 pages today and picked up some inserts!"  These are the little things that make us happy geeks)

A  majority of our days on The Bet went very well, which was good for The Bet if not as entertaining in the telling.  It was as if all of the bad luck we had on Lucky Stiffs was our debt paid, and we were collecting with relatively smooth sailing on The Bet.  If we were not exactly making great art, we were, to quote Shelly Winters from her complaint to Stan years earlier, making the schedule.(First, You Have To Make The Movie - Stan's Guest Blog))

Things were running pretty smoothly on set, while most of the drama was unfolding off-set.  More on that in the next post.